Abt e-Line is developing a fuel cell transporter van 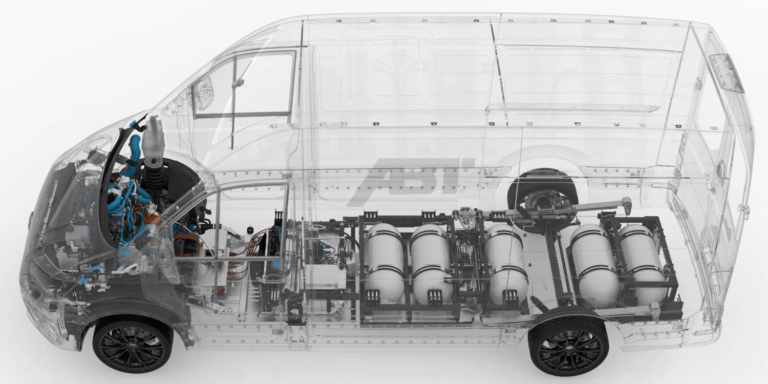 The German conversion company Abt e-Line has decided to start the series development of vans with fuel cells together with partners. The reason for this is the high demand on the market.

According to the company, it was able to gain a lot of experience in the integration of fuel cell drives in two large Tier 1 projects in the past three years. As reported, the retrofitter from Kempten in the Allgäu region was also involved in the conversion of the two series-production e-transporters as demonstrator vehicles exhibited by Bosch Engineering at the IAA Transportation – a VW e-Crafter and a MAN eTGE respectively.

For the construction of the demonstrator vehicles, the Kempten-based company was responsible for the vehicle integration of the fuel cell system, the safety concept of the entire vehicle, the complete vehicle body and the road approval. Furthermore, a 700-bar hydrogen tank system was integrated. Depending on the customer’s wishes, this can comprise two to seven cylindrical pressure tanks, which are integrated into the underbody – which, according to the Abt statement, was a challenge “due to the vehicle architecture and the available installation space”.

As a result, a “range increase of several hundred kilometres was achieved” – Abt does not provide more precise details at this time. Only this much: refuelling is “now necessary even later than with comparable diesel models”. The press release also does not mention which partners are involved – due to the IAA project, Bosch is a probable partner.

Abt e-Line wants to stick to the battery in parallel, as it is sufficient in the van for last-mile delivery, for example – and is also more efficient for customers overall. “Even if the future of mobility will be predominantly battery-electric for efficiency reasons, the fuel cell offers enormous potential for niche applications, especially in the van sector,” the statement says.

One such niche is express logistics, where daily distances of 800 kilometres are common – “for which battery sizes of 300 kWh would be necessary without a charging stop,” says Abt. Since even premium electric cars rarely have more than 100 kWh, this is hardly feasible for vans for cost reasons, among others. “We therefore see a sensible area of application for the hydrogen fuel cell in long-distance logistics,” says Eric Plekkepoel, CEO of Abt e-Line GmbH.

In light commercial vehicles Abt is not alone with its fuel cell plans: The Renault joint venture Hyvia offers a Renault Master with a fuel cell drive. One size category below that, the Stellantis Group is pushing the fuel cell in its five-metre vans – as at Abt also as a supplement to the battery.