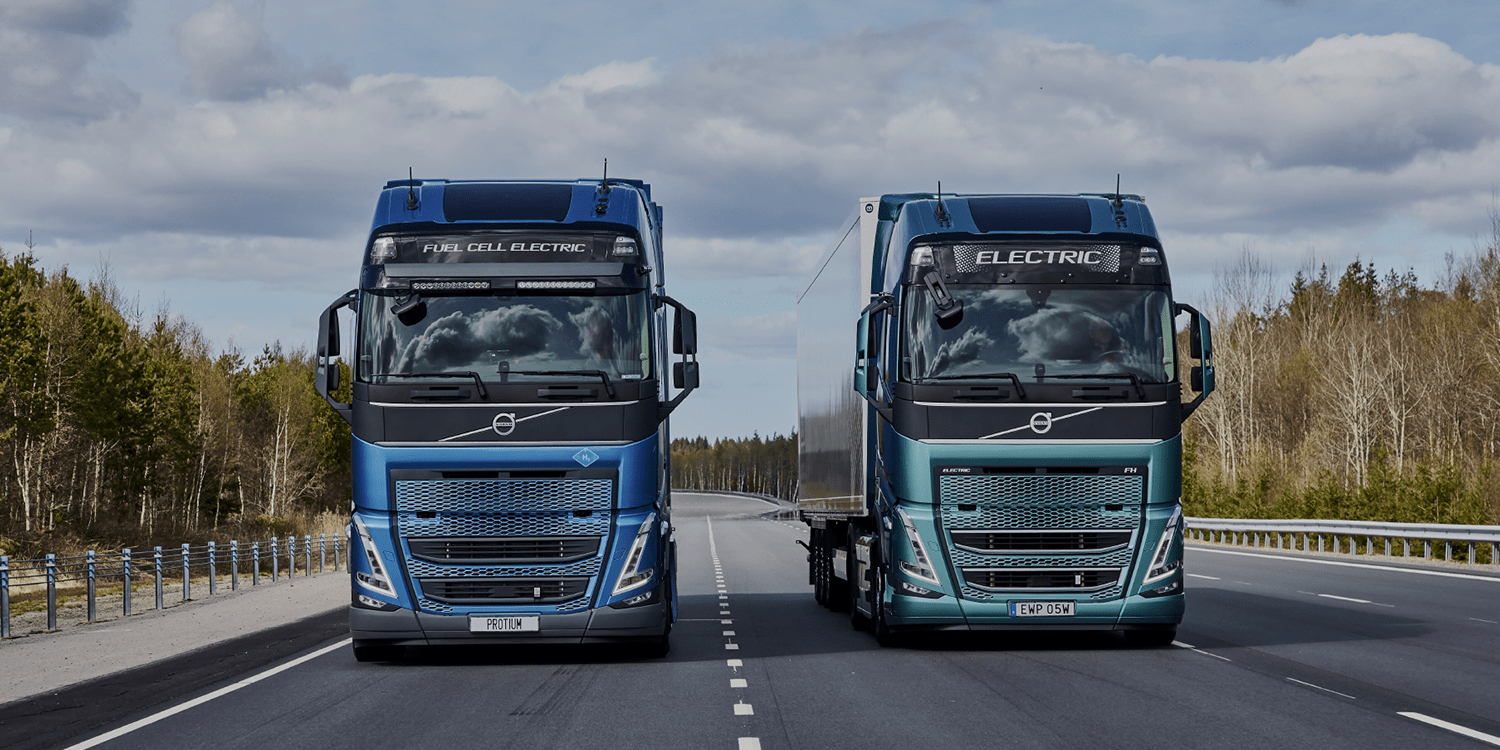 Volvo Trucks has presented an electric long-haul truck that is supposed to have a range of up to 1,000 kilometres with a hydrogen fuel cell. The Swedish company is not yet sure when such a vehicle could go into series production – but the first test vehicles are already on the road.

It has long been known that Volvo, in addition to its current battery-electric trucks, also relies on the fuel cell in the decarbonisation of the transport industry. The Swedish company – not to be confused with the largely independent carmaker Volvo Cars – have founded the joint venture Cellcentric together with Daimler Truck, which is to produce fuel cells for the long-haul trucks of the two truck manufacturers in its future factory in Weilheim/Teck.

But unlike its partner Daimler Truck with the GenH2 truck, Volvo Trucks has not yet announced a concrete model for the Cellcentric fuel cells.

Volvo wants to include the electric truck with hydrogen-powered fuel cells in its product portfolio “in the second half of the decade”. Given the common supplier of the fuel cells, it is hardly surprising that Daimler Truck is targeting the same period as the premiere for its H2 truck. However, even before the series premiere, customers will be using the Swedish hydrogen truck in the pilot phase – a common practice in the transport industry.

When it comes to the technical data of the fuel cell truck – at least the prototype is based on the Volvo FH Electric – Volvo is still keeping a low profile. Apart from the range on the level of a diesel truck, the manufacturer only states that the two fuel cells should be able to generate 300 kW of electricity – as in the GenH2 truck. With the available power, the total weight could be “around 65 tonnes or even more”, Volvo says.

Another important figure: the hydrogen supply on board should be able to be refilled in less than 15 minutes. The Swedes do not mention how many kilogrammes of hydrogen are involved. Nevertheless, the 15 minutes are an important distinguishing feature from the fuel cell truck from Daimler Truck: the German company prefers deep-frozen, liquid hydrogen for the series model. The hydrogen cooled to -253 degrees Celsius is then called LH2 and can be refuelled like a liquid in a few minutes. In addition, the energy density is higher in the tanks, which are also cooled to this temperature – so less installation space is needed to store the same amount of hydrogen.

The catch: the hydrogen infrastructure is currently designed for gaseous storage at high pressure – for commercial vehicles at 350 bar and for passenger cars at 700 bar. H2 Mobility, the largest operator of hydrogen filling stations in Germany, is planning to focus on H2 commercial vehicles in its next round of expansion, but also with filling stations for gaseous hydrogen. Nevertheless, H2 Mobility is open to LH2. It is a great advantage that Daimler Truck is one of our shareholders, so we are constantly in close contact with various technologies and can react at an early stage,” said H2 Mobility CEO Nikolas Iwan in March in an interview with electrive.net.

Currently, Volvo is focusing on gaseous storage. As with other H2 trucks, such as the Hyundai XCIENT, the hydrogen pressure tanks are placed behind the cab. Volvo does not stack the pressure tanks horizontally here, but has placed five large tanks vertically next to each other. The tank connection is also located on the driver’s side of the clearly visible tank unit.

For the fuel cells produced jointly with Daimler Truck, it is not a problem how the hydrogen is stored on board – in the fuel cell itself the H2 arrives in a gaseous form anyway. “The fuel cell can process both liquid and gaseous hydrogen, there is no difference,” Daimler Truck CEO Martin Daum said last year. “The filling stations will only be able to support one technology – gaseous or liquid. So the industry has to make a choice.”

Roger Alm, president of Volvo Trucks, does not comment on the issue of storage – there is not a word in the memo about the use of liquid hydrogen. Alm instead stresses the importance of the energy used to produce the hydrogen. “We expect the supply of environmentally friendly hydrogen to increase significantly in the coming years, as many industries will depend on it to reduce CO2 emissions. However, we cannot delay the decarbonisation of the transport sector any longer, because we are already very late,” Alm said. “So my clear message to all transport companies is: take the road today with battery electrics, biogas and the other options available. Fuel cell trucks will be an important addition for longer and heavier hauls in a few years.”

In addition to long haul, Alm also sees fuel cells as an option for countries ” where battery charging options are limited.” “The versatile range of electric trucks with batteries and others with fuel cells will enable our customers to get rid of CO2 emissions altogether, regardless of the transport tasks at hand,” says the Volvo manager.

With reporting by Sebastian Schaal, Germany.

08/18/2022
Another hydrogen filling station commissioned in Wesseling
Wesseling, 18 August 2022 | Today, partners Shell and H2 MOBILITY Germany commissioned the filling station at the Wesseling Shell station at Ahrstrasse 99. Drivers of zero-emission fuel-cell passenger cars now have another refuelling option in ...
Read More
08/17/2022
Loop Energy is setting up a factory in the UK
Canadian fuel cell specialist Loop Energy will extend its presence in Europe later this month by expanding into the UK. The company plans to set up a production facility just outside of London to produce fuel cell components. Loop Energy’s n...
Read More
08/15/2022
BMW considers producing fuel cell SUVs from 2025
According to a media report, BMW wants to produce fuel cell SUVs in large series from 2025. BMW had previously only confirmed that it intended to offer the iX5 Hydrogen in small series this year. This is reported by the Japanese business paper...
Read More
08/15/2022
Inflation Reduction Act passes the US House of Representatives
The Inflation Reduction Act, which also includes the reform of the EV tax credit, has now passed the House of Representatives after the Senate and is expected to be signed by President Joe Biden in the coming days. The new eligibility requirem...
Read More
08/09/2022
GP Joule to order 5,000 hydrogen trucks from Clean Logistics
Clean Logistics has secured 5,000 hydrogen-electric trucks from GP Joule through a framework agreement. Delivery is scheduled between 2023 to 2027, with a pre-series expected by late 2023. The sales volume is in the low single-digit billion eu...
Read More
08/09/2022
NEV sales remain stable in China over July
564,000 new energy vehicles were sold in China in July. This is 7,000 fewer than in the previous record month of June 2022, but NEV sales more than doubled compared to the same month last year. Following December 2021 (505,000 units) and the r...
Read More
Load more news...